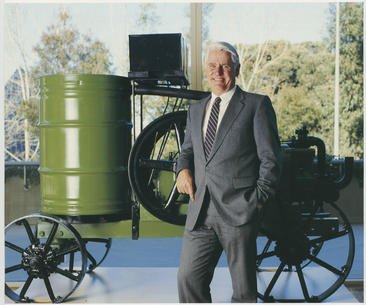 Harry Perkins, ‘the boy from Belka’, joined the Board in 1975. He had taken over his family farm at 20 after his father’s death and had a reputation as a forward thinker who was committed to community service, education and science. He was regarded as a cohesive and respected force on the board as Wesfarmers redefined and reshaped itself under Trevor Eastwood’s leadership, including introducing non-executive directors who weren’t farmers. He died of cancer on 14 December 2002, one day after resigning from the Board. He was also Chancellor of Curtin University and an Officer of the Order of Australia for his services to agriculture, education and the community.