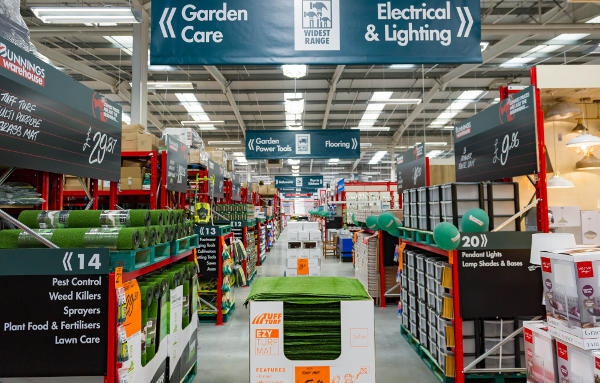 The third Bunnings Warehouse store in the UK and Ireland opened its doors to customers on Friday 9 June in Hemel Hempstead, Buckinghamshire.

The new store, on the site of the former Homebase at Apsley Mills Retail Park, continues the momentum of establishing the Bunnings Warehouse format in the UK’s £38billion-a-year home improvement and garden market.

The Hemel Hempstead store is over 64,000 square feet and employs 111 people – including 53 in newly created full and part-time roles.

It also stocks more than 27,000 different home improvement and garden lines, including paint mixing services from Johnstone’s Trade, Crown and Dulux and a new tool shop offering world-leading brands such as Ryobi and DeWalt.

The company, part of Australia’s Wesfarmers Group, plans to invest up to £500million rolling out Bunnings Warehouse stores across the UK and Ireland over the next three to five years.

Max said: “It’s great that Bunnings has chosen Hemel Hempstead as the location for its third store in the UK. Hemel is where it all began for me so I’m delighted to be back opening the store. I’m sure it will be a huge success.”

The new store’s Complex Manager, Darren Reid, added: “Our team members have worked really hard to get the store ready for opening and are looking forward to sharing their expertise and enthusiasm with customers in Hemel. We’re ready to welcome people to the new store!”

And the fun doesn’t stop there. The new store will also be hosting two grand opening weekend events with a raft of free family activities on 17/18 and 24/25 June. Customers can enjoy face-painting, balloon modelling and even join Peppa Pig & George for a Story Time session (see in store for details).

About Bunnings UK and Ireland

In February 2016 Bunnings acquired Homebase, the second largest home improvement and garden retailer in the United Kingdom and Ireland. Bunnings Warehouse opened its first two stores in St. Albans in February/April 2017, with additional stores confirmed in Hemel Hempstead, Milton Keynes and Folkestone. As of May 2017, it also operates as Homebase out of 252 trading locations, employing over 12,000 team members in the UK and Ireland.