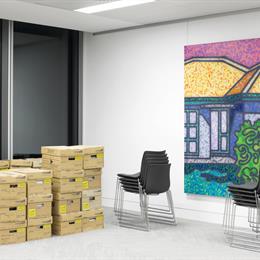 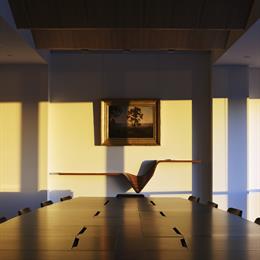 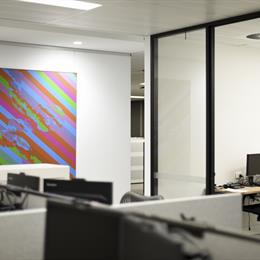 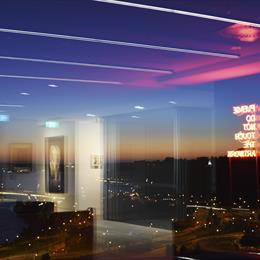 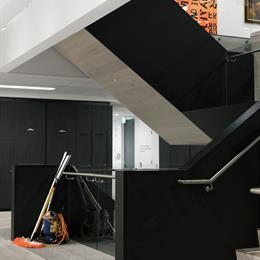 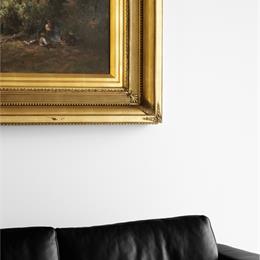 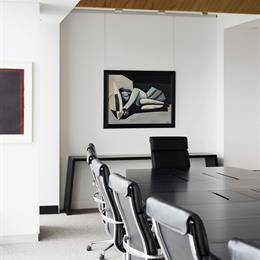 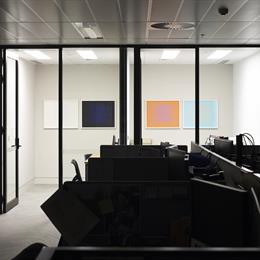 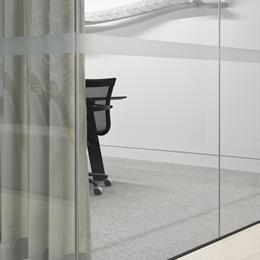 Following thirty years in residence in the iconic Wesfarmers House at 40 The Esplanade, Perth, Wesfarmers moved into new premises at Brookfield Place, 123 St George’s Terrace in October 2016.  This move offered an unprecedented opportunity to display the depth and diversity of the extensive Wesfarmers Collection of Australian Art and in early 2017, curator Helen Carroll Fairhall invited artist Dan McCabe to document the newly installed collection – considering the dynamic at play when works of art assert their presence – whether quietly or loudly – to emit their own distinct poetic charge within the environment of a contemporary urban office.

ARTIST STATEMENT
Office walls with view of a river is a photographic series documenting the Wesfarmers Art Collection in Perth, Australia. Drawing upon the history of art collections and collectors, it considers the transitory nature of these artworks and attempts to capture their semi-permanent existence in a functional office space. Starting in late 2017, this project was completed over an 18month period.

Artworks, such as sculptures or paintings, have featured as the subject of new artworks for centuries. Throughout art history, actual collections of art have also been the subject of many new artworks. Most notable are the “Art Collection” or “Gallery” paintings by Flemish artists of the 17th and 18th Century. In these paintings, often commissioned by affluent Dukes or aristocrats of the time, large overcrowded salon hangs are presented in enormous rooms. Hundreds of significant and prized paintings from the previous 200 years completely cover the walls. The foreground too is cluttered with marble sculptures and additional paintings on easels, works stacked against the wall in piles. The who’s who of the 17th Century are also depicted, discussing the works over wine and lavish spreads as their hounds run around their feet. These dignitaries, as well as royalty and religious institutions, were the significant art collectors of their time.

Today, museums, universities, institutions and corporations play a key role in collecting the significant artwork of our time. These works are not presented in ornate palaces, churches or castles, but are instead presented in white-boxes, building lobbies and on office walls. Historic and contemporary works presented in the minimal architecture of our time. Situated in an elegant high-rise building on the Derbarl Yerrigan (the Swan River), the artworks of the Wesfarmers collection live in a hybrid space somewhere between a contemporary art gallery and functional office.

During business hours this space is alive with people working, meeting, eating, and moving about. Although the artwork features prominently throughout the building, when combined with a long list of tasks and meetings for the day, the art can become part of the architecture. When photographing the artworks after hours, I wanted to capture the fleeting and serendipitous moments where the artwork and the context combine to create something new. A connection that was potentially unintended or overlooked by the people that occupy this space on a daily basis, but when isolated and framed creates a new tension and takes on a new meaning.

In the work titled ARKLEY, we see a large painting by the iconic Australian painter Howard Arkley obscured by two stacks of chairs alongside towers of boxes containing office files. Further along there is a picture by Charles Rolando of three European settlers sitting by a small fire next to a river. This painting with a gilded frame next to a luxurious black leather couch also finds itself overlooking a river. A bright orange cleaning mop leant against a railing for no longer that a few minutes, ignites Rosalie Gascoigne’s arrangement of sliced road signs on the floor above. An adolescent school student lies in the fetal position at the head of a board room table and the tail of a freshwater spirit ducks behind a curtain. Inside a still empty room, a crescent moon and star.

As with my interpretation of the collection, the viewer may also draw their own interpretation of each composition. And like the Flemish painters capturing a moment from the 17th Century, I tried to present and acknowledge the mood, tension, history and politics of our time.