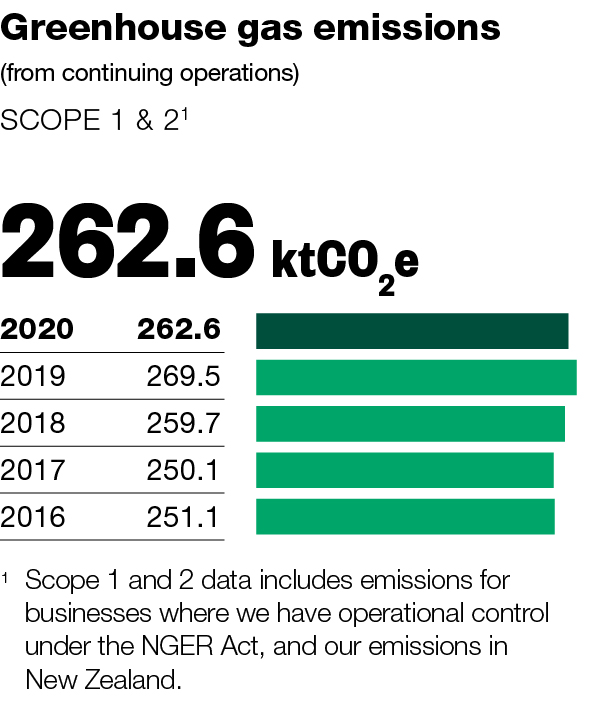 In recognition of the important role business plays in reducing carbon emissions and the impact of climate change, Bunnings continued to work towards its target of reducing emissions by 10 per cent by 30 June 2025, based on a 2018 baseline that factors in continuing growth of the store network. Since the end of the 2020 financial year, Bunnings accelerated its plans to reduce emissions, targeting net zero Scope 1 and 2 emissions by 2030. Reducing energy consumption and transition towards more renewable energy across its network underpins the efforts to reduce carbon emissions.

Bunnings continued to increase the generation of renewable power via solar photovoltaic (PV) installations across the network. During the year, 35 sites had solar PV systems installed with 67 sites in total completed at 30 June 2020. A further 25 systems are scheduled for completion next financial year, as well as expanding solar capability to 10 pre-2018 installed smaller systems.

To accelerate energy efficiency across the store network, LED lighting is a standard inclusion for all newly built Bunnings stores and stores are being gradually retrofitted across the existing network. During the financial year, LED upgrades were completed at 43 warehouses, four smaller format stores and three trade centres. At 30 June 2020, in total 149 warehouses, 12 smaller format stores and three trade centres were using LED lighting. On a like-for-like basis, LED lighting has been shown to reduce energy consumption by more than 20 per cent per store.

The focus for the year ahead will be on evaluating technologies and design initiatives to drive greater energy efficiency and exploring other opportunities to reduce emissions across the store network.