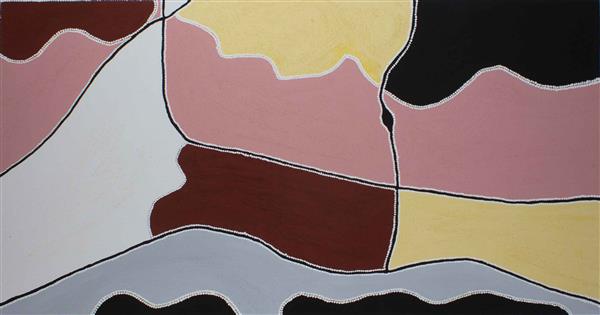 Freddie Timms was born at a place called Police Hole near Foal Creek on Bedford Downs Station south west of Warmun.  His Gija name, Ngarrmaliny, is the same as that of his birthplace. He spent his childhood on Bow River and Lissadell Stations then worked as a stockman, handyman and fencer on several stations throughout the East Kimberley. He knew Rover Thomas when they both worked at Bow River and Texas Downs and danced and help paint boards for early performances of Thomas’s Gurirr-Gurirr. When they were all living at Frog Hollow south of Turkey Creek in the 1980s and Joel Smoker of Waringarri Arts brought canvases to Jack Britten, Rover Thomas, Hector Jandany and his father-in-law George Mung-Mung, Timms asked for canvases as well.

Timms painted in a style reminiscent of Thomas but recognisably his own, with expanses of open plains lined with white dots. Many of his artworks are like aerial maps of the bones of the country where he lived and worked all his life. Mapping is on a topographic level showing features of the landscape such as black soil, red ground, sandy ground, hills, creeks and water holes as well as a historical and spiritual level showing roads, stock yards, homesteads and dreaming places. Much of the country where he worked on Lissadell, a frequent painting subject, is now under the water of Lake Argyle formed by the damming of the Ord River. He said “I think about the country where I was walking and camping, all the main water holes, all the camping areas. I remember the places where I used to go mustering and I follow them up with my painting.”

Freddie Timms was one of the few Aboriginal artists from a traditional background who on occasion sought to make a political statement in his work. A striking example of this is ‘Whitefella-Blackfella’, which was acquired by the National Gallery of Australia, which describes the position of Aboriginal people in Australia. In a large black canvas four symbolic figures are strategically placed with the ‘whitefella’ at the top, the yellow Chinaman under that, then the African, then the "blackfella right down at the bottom".